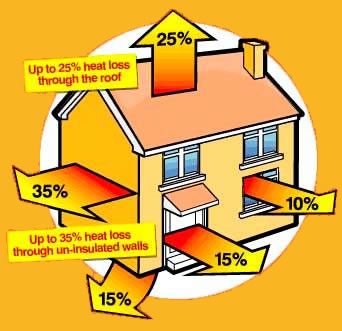 Insulation - The best way for you to save energy The two best ways to reduce the amount of energy a home uses are:

In doing so you will drastically reduce the harmful CO2 emissions caused by your home’s energy consumption as well as saving up to 40% on your heating bill.

Both types of insulation can have a dramatic effect. A correctly insulated home can reduce fuel bills by as much as €200 per year (depending on your house size) and once it’s in place it lasts a lifetime. Imagine feeling the benefits of a warmer, cosier, more comfortable home that costs less to run and is kind to the environment. To achieve this, all we have to do is think Firetech.

The human race is engaged in the largest and most dangerous scientific experiment in history. It may not be intentional, but we’re beginning to experience the disastrous consequences of tampering with the Earth’s atmosphere.

The phenomenon known as global warming is occurring because large volumes of greenhouse gases - including carbon dioxide (CO2) – are escaping and accumulating in the Earth's atmosphere. This causes the planet’s average air and ocean temperatures to increase and sea levels to rise, resulting in increasingly severe weather conditions. This effect is called climate change and it’s already beginning to happen. The facts make for uncomfortable reading:

It’s not too late to act, but we need to do so now. If we start solving the problem today, we can make the future more comfortable for everybody.

Climate Change - What causes it?

The climate change that we are experiencing as a result of global warming won’t just lead to the temperature rising by a couple of degrees. The effects will be dramatic and cause extreme weather conditions - including gales, droughts, massive floods and increasingly fierce weather.

The energy we use to heat, cool and light our homes is responsible for more than 40% of all the CO2 released by power stations. So reducing these emissions would be a huge step in slowing down climate change. There are a number of ways we can achieve this. And it’s not as difficult as you might think.

2021 © All Rights Reserved by FIRETECH EXPERTS